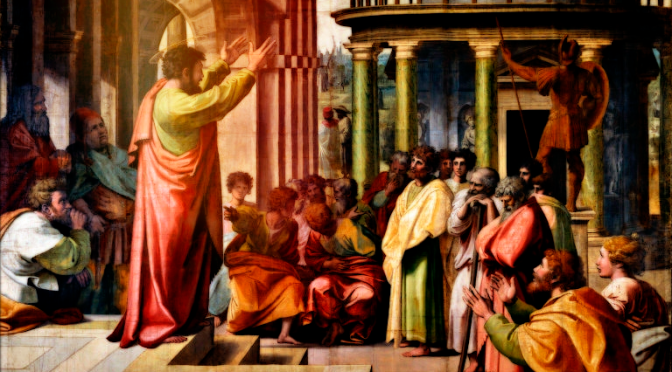 Apostle Paul’s address to Athenians in Areopagus Hill (“the Roman equivalent is Mars Hill”) is one of the well-known passages (Acts 17:22-34) to his readers. Some see Paul’s rhetoric for the risen Christ among Athenians in Mars Hill as his total failure. They claim that Paul never opted to use rhetoric that appeals to the intellect thereafter. They see no place for apologetics or have a lowly view of the need for apologetics in the evangelistic ministry and thus are quick to discredit it on the basis that Paul could not win many and plant there a local church. Is it really true that Paul failed miserably in Athens and never was apologetic in other places where he later preached and planted the churches?

Firstly, we have to remember that Paul had no plan to stay extensively in Athens and preach there. He was forced to leave Macedonia to escape persecution. There he was waiting for Timothy and Silas to join him from Berea (Acts 17:14) and then travel to Corinth. While waiting for them in Athens, Paul could not contain himself from preaching after seeing the rampant idolatry of Athenians. Those idols were dedicated to different gods and goddesses to appease them so that no bad omen would fall upon them. Idolatry is one of the prime issues he addresses in his epistles. In fact, Athens was named after a goddess, Athena, in her honor.

Secondly, the Athenian Council of Ares which had full control of affairs in the city, silenced Paul immediately after he mentioned the risen Christ from the dead in his address to the council. Some of them thought that Paul was preaching of a foreign god. They probably mistakenly understood Anastasis (“resurrection”) as the goddess consort of a god named Jesus, because the “resurrection” is in the feminine gender while Jesus is in the masculine gender.

For Athenians, the resurrection could have never happened. Paul’s proclamation of the resurrection account was utter foolishness. Five hundred years earlier, their own tragic poet Aeschylus (525-456 BC) claimed in the same Athenian Council of Ares, “When the dust has soaked up a man’s blood, once he is dead, there is no resurrection” (Eumenides 647-48). Therefore, Paul seemed to be a mere babbler, who had no knowledge of his own but learned things from other people without understanding and made his own, to them. That caused commotion among them which led to a sudden dismissal of the council.

Finally, Paul was not legally free to continue teaching in the city, since the council had not taken any action to approve Paul to do what he wanted to do – teaching or reasoning with Jews and God-fearing Gentiles every day in synagogues as well as in agora. It was the forum and marketplace of the city which happened to be the center of Athenian life. All he could do in Athens was to wait for receiving legal protection or permission from the council to teach or move on to Corinth.

Having laid these three reasons, we cannot label his brief mission work in Athens as a complete failure, as Dionysius, the Areopagite who was also a member of the Council of Ares, a woman named Damaris, and others with them believed the message and joined Paul. Given the little opportunity to preach the gospel in an unusual circumstance also he had to leave without finishing his preaching, Paul did, in fact, win some. He adapted himself to the context and the audience he was preaching to, just as he talked about it later to the church of Corinth: “To the Jews I became as a Jew, in order to win Jews. To those under the law I became as one under the law (though not being myself under the law) that I might win those under the law. To those outside the law I became as one outside the law (not being outside the law of God but under the law of Christ) that I might win those outside the law… I have become all things to all people, that by all means I might save some. I do it all for the sake of the gospel, that I may share with them in its blessings.” (1 Corinthians 9:20-23 NIV). Thus, his work in Athens cannot be labeled or talked about as a failure in light of all the reasons presented above.

For more readings on Paul’s address to the Athenian Council in Athens, you may read my previous post.

4 thoughts on “Did Paul Really Fail in Mars Hill?”